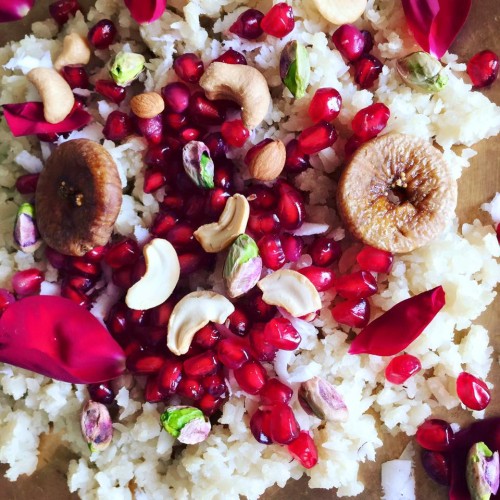 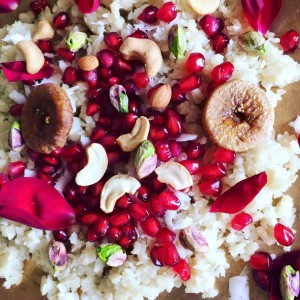 This sweet and festive dish served by the Bene Israeli Jews of India on important occasions like weddings and high holidays is really and truly a fusion of Indian, (specifically Konkan) and Sephardic Jewish traditions. It somewhat resembles a Chiwda or Bhadang, a trail mix of parched rice, nuts and coconut favored by Indians.
Pohe or flattened rice is typical of Maharashtrian households and is made in many different sweet and savory ways. The Kande Pohe ceremony and its meaning is well known to Maharashtrians.
Pohe comes in varying grades too, thick, medium and nylon -the last being a pohe that can be eaten without cooking. Many of the ingredients that go into Malida are symbolic in meaning to the Jewish community and interesting also to the Hindus and Muslims in India. Ingredients like figs, pomegranates, dates and rose petals are abundantly available in the sub continent. Fruits such as pomegranate, grapes or raisins represent spring and birth in Judaism. The pomegranate has a special place in Jewish life and represents learning and success. Like dates and figs, pomegranates are part of the shivat haminim or seven fruits and grains of ancient Israel.
Grown in the Mediterranean region for several thousand years there are specific references to the pomegranate in the Bible.
In the Bible 1 Kings 7:13-22, pomegranate is depicted on the capitals of the two pillars of the Jerusalem temple built by King Solomon whose crown too was designed to copy the that of the pomegranate. This fruit also appears on ancient coins of Judea.
The pomegranate is a symbol of righteousness because it is said to have 613 seeds, which corresponds with the 613 mitzvot, or commandments, of the Torah.
For this reason and others, it is traditional to eat pomegranates on Rosh Hashanah.
Pomegranate called Dalimb in Marathi, (not to be confused with Dalimbi) is believed to have its origins somewhere in the areas between northern India and Iran and the fruit is often mentioned in the Ayurvedas as a cure for many ailments. Pomegranate is also believed to be on of Lord Ganesha's favorite fruits. In the holy Koran it is one of the fruits that grow in the gardens of Paradise.
Fig trees of which, there are several species are amongst the most revered India-Peepal and Bodhi among them. Figs are believed to be one of the earliest cultivated trees in the Middle East with fossils being found in the Jordan valley dating back 11,000 years, pre-dating grain cultivation.
Dates are said to originate in Iraq but fossil remains have also been found in the Indus Valley and Harappa. A date palm cultivar, known as Judean date palm is said to have successfully sprouted after accidental storage for 2000 years in Masada. This particular seed is said to be the oldest viable seed ever found.
The Malida is placed inside a cloth, like the Challah (braided egg bread) and kept covered and served after the blessing with wine. It contains no milk or meat and is Parve and can be served with both Dairy and meat meals. Kashrut laws do not permit the mixing of milk and meat in a dish or a meal. While the 7 sacred grains and fruits do not include rice but prescribe barley and wheat, parched rice like processed couscous cooks in less than a minute