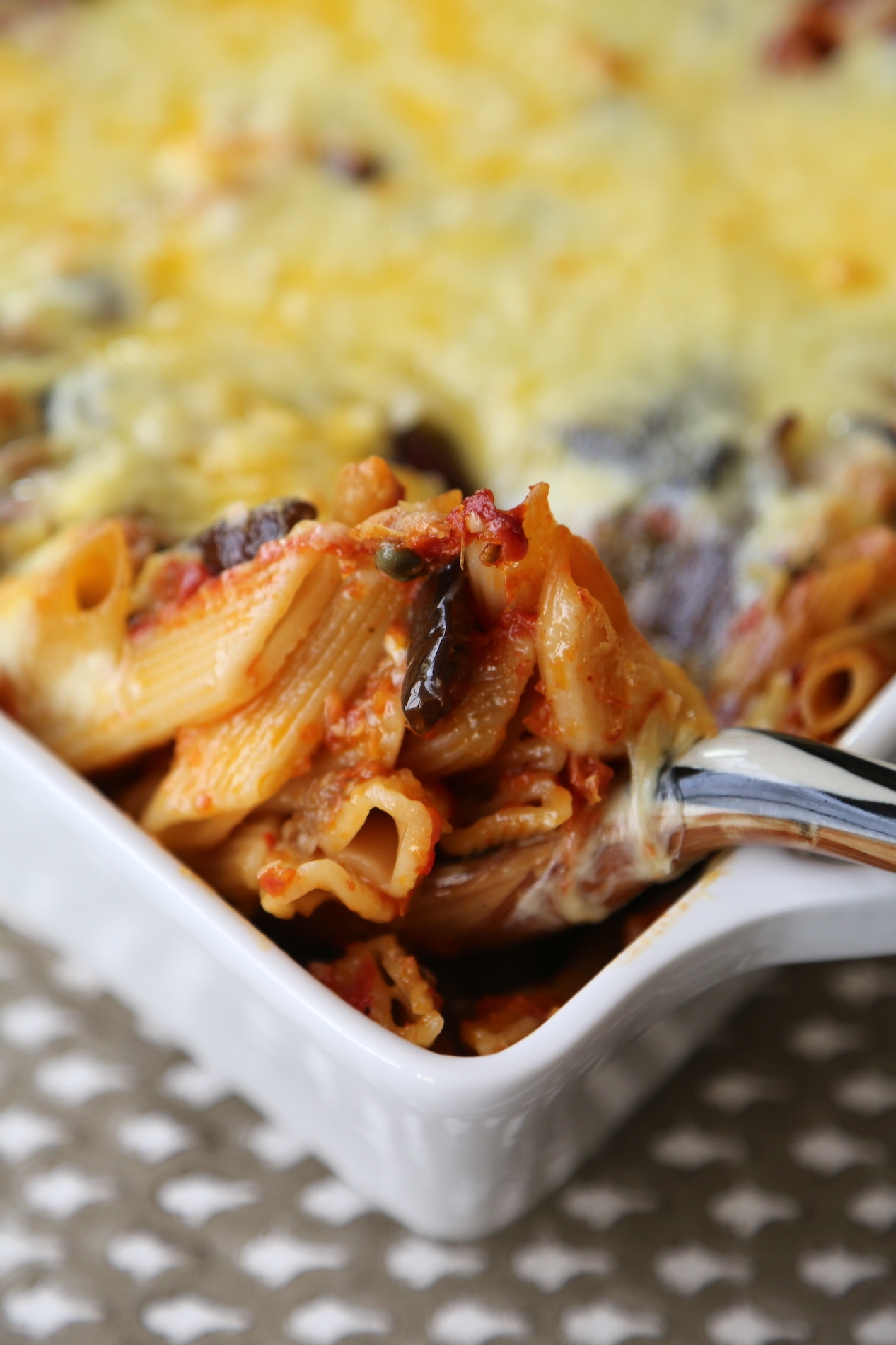 A quick and easy dish for a family dinner. Capers are an astringent flower bud that generally comes pickled in small jars. Use Italian eggplant also called brinjal or aubergine

salt and sugar to taste

Heat the oil and saute the onions until soft on medium flame.

Add garlic ansd saute again about 1-2 minutes until garlic is soft and fragrant.

Add tomatoes, capers, chilli flakes, black pepper and oregano. Stir well and cook about 10 minutes on medium flame then stir in 2 cups of water and let it reach a boil. Take off the fire.

Add salt and sugar to taste. Stir in eggplant and pasta.

Pour into a 9 by 12 by 3 inch baking dish or a similar sized baking dish. Cover with foil and let rest 15 minutes.

Remove foil and top the pasta with the cheese sauce. Spread evenly. Cover loosely again with foil and bake in the middle rack 30 minutes. Remove foil and continue baking until top is golden.

Serve warm with a side of salad. 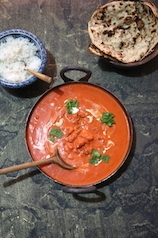 On Diwali in 2017 I had the good fortune to meet the owner of a south Mumbai restaurant best known for its legendary Butter chicken. Butter chicken is one of India's most popular dishes world wide. Often called Chicken Makhani the general impression is that it has butter in it. The original creators of this dish Moti Mahal's Kundan Lal Gujral it is believed use white butter in their recipe. But a conversation with this Mumbai restauranteur who has been dishing out butter chicken to hungry Mumbaikers for nearly a century revealed that they use no butter in this recipe at all. He went on to give me an 'andaaza' recipe (andaaza means approximate) and made me promise that I wouldn't reveal the name of his restaurant and would tweak it enough to make it just slightly different from his version. I went home and tried 4 different versions of his recipe. The recipe that follows is one that is easier for home chefs like you and I to prepare for our families in a regular kitchen.

Chicken Tikka masala is a British creation and quite similar to Butter chicken except that it uses chicken tikka (kebabs) instead of shredded Tandoori chicken and tomatoes from a can. Food historians argue that butter chicken was turned into Chicken Tikka Masala by a British chef who used a can of readymade tomato puree and cream and dunked chicken tikka in it. Possibly tracing the roots of some of these recipes will never quite lead us to an exact answer but eventually the proof of the pudding is in the eating.

FOR THE RED SAUCE

2 TBSP MAIDA OR ALL PURPOSE FLOUR OR RICE FLOUR

SPRIGS OF CORIANDER TO GARNISH

SALT AND SUGAR TO TASTE

HEAT 2 TBSP OIL AND BUTTER AND SAUTE ALL THE WHOLE SPICES FOR 2 MINUTES UNTIL FRAGRANT AND SIZZLING. REMOVE WITH A SLOTTED SPOON AND DISCARD. COMBINE ALL THE INGREDIENTS FOR THE RED SAUCE EXCEPT THE CASHEWS IN A DUTCH OVEN LIKE POT OR LARGE SAUCEPAN. ADD WATER UNTIL THE TOMATOES ARE COVERED BY ABOUT 2 INCHES OF LIQUID.

PRESSURE COOKER 3-4 WHISTLES UNTIL THE TOMATOES ARE TOTALLY PULPED.

ADD THE CASHEWS AND COOK UNTIL MIXTURE IS THICK AND FRAGRANT. ADD MORE LIQUID IF REQUIRED.

REMOVE FROM THE FIRE AND COOL.

PUREE THE COOLED TOMATOES TO A SMOOTH PASTE. STRAIN THROUGH A SIEVE AND DISCARD THE FIBRES AND SKINS.

ON A MEDIUM FLAME IN A NON-STICK SKILLET HEAT THE OIL OR BUTTER AND ADD THE FLOUR. STIR TO BLEND AND COOK UNTIL FLOUR IS BUBBLY BUT DO NOT BROWN. ADD THE CREAM AND STIR WELL. STIR IN THE MILK AND COOK 1 MINUTE. ADD THE MAWA AND STIR TO BLEND INTO A SMOOTH THICK PASTE. STRAIN THIS SAUCE WHILE HOT.

STIR THE STRAINED HOT BECHAMEL SAUCE INTO THE TOMATO PUREE AND MIX THROUGHLY.

ADD THE CHICKEN TIKKA OR SHREDDED TANDOORI CHICKEN PIECES AND SET ON A LOW FLAME.

STIR REGULARLY TO PREVENT ANY BURNING. COOK 15 MINUTES OR SO. ADD SALT AND SUGAR TO BALANCE FLAVORS.

REMOVE FROM FLAME, POUR INTO A SERVING DISH, GARNISH WITH CORIANDER SPRIGS AND SERVE HOT WITH NAAN OR PLAIN BOILED RICE. 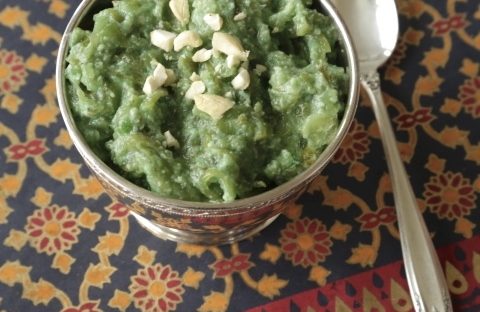 This is a popular Indian dessert made from Lauki or bottle gourd a long light green gourd available easily and year round in Indian markets.

It has a subtle flavor so add cardamom a little at a time. Some add rose water or kewra instead. You can use a little food safe color to brighten the doodhi which turns a rather pale grey green when cooked but it's a matter of choice. I use a little bit of Matcha or concentrated spinach powder.

Wash the lauki or bottle gourd. Slice in half laterally and then slice each piece lengthwise into two. Remove seeds. Shred the gourd on a medium grater.

Combine the ghee, sugar, one cup water and shredded gourd in a large kadai or wok and cook on medium heat for 35 minutes, stirring to prevent burning. Add the milk and continue to cook until mixture reduces in volume by half.

Add the milk solids and mash into the doodhi. Cook another 15-20 minutes until milk solids are well incorporated into the gourd. Add color at this point and mix well. Add the ground cardamom and garnish with nuts. Serve warm and reheat when required. Will keep refrigerated for 7 days. 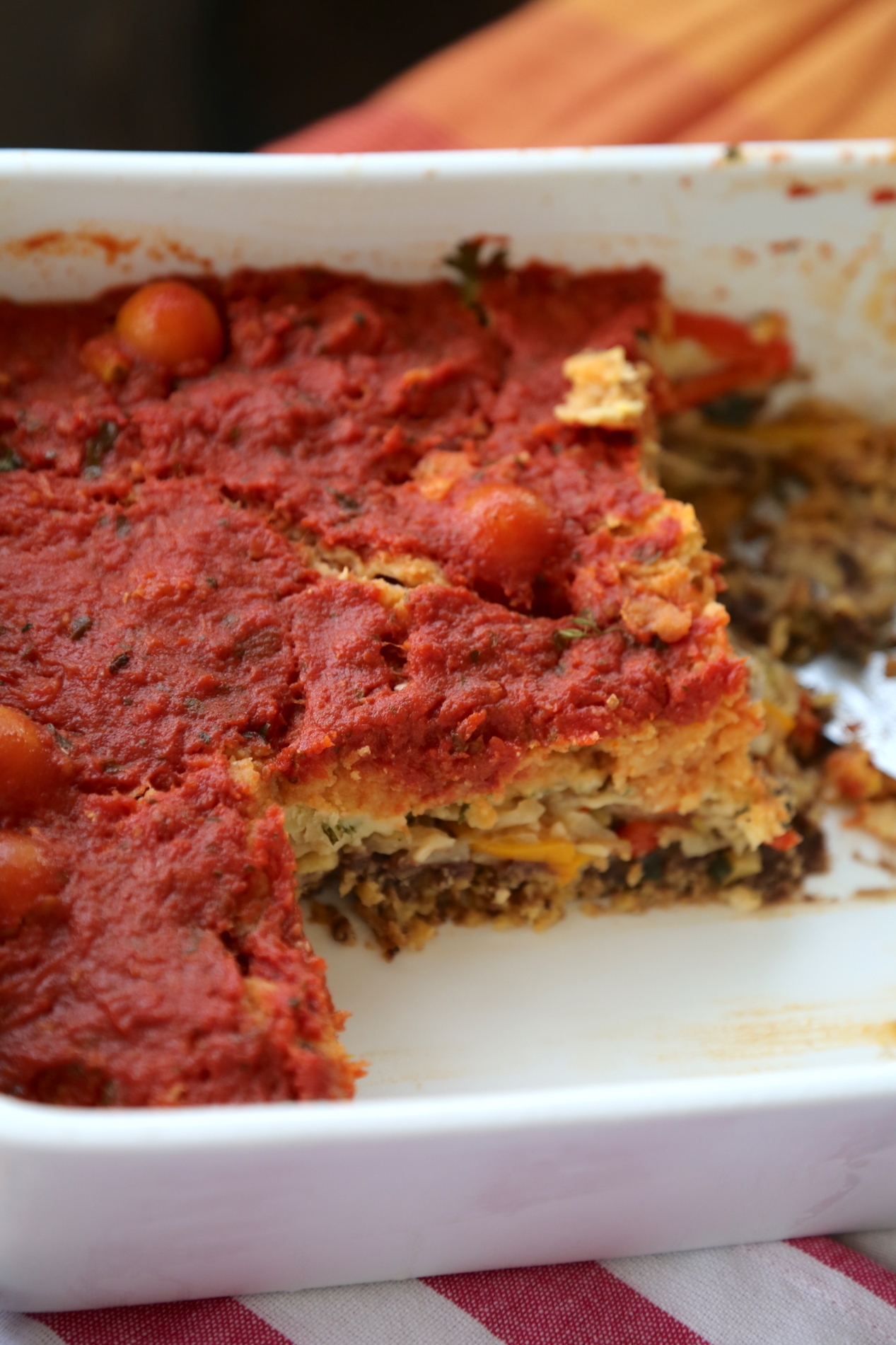 CHILAQUILES IS A MEXICAN DISH OF TORTILLAS SIMMERED IN SALSA. THE FIRST TIME INATE IT WAS DURING A TRIP TO MEXICO CITY. THE DISH CAME AS A SURPRISE BECAUSE IT CONTAINED NO CHEESE OR EGGS.

THERE ARE MANY VERSIONS OF THIS DISH IN MEXICO, SOME WITH PULLED MEAT, FRIED EGGS AND REFRIED BEANS. MINE CAN BE VEGAN IF YOU OMIT THE CHEESE. I SOMETIMES SUBSTITUTE THE TORTILLAS FOR LEFTOVER SALI WAFERS. TORTILLA CHIPS AND SALI ARE GENERALLY SALTED SO KEEP THIS IN MIND WHEN YOU SALT THE REST OF THE DISH.

HEAT 2 TBPNS VEGETABLE OIL IN A DUTCH OVEN TYPE POT ON MEDIUM FLAME. ADD HALF THE ONIONS AND HALF THE GARLIC AND COOK UNTIL SOFT OVER A MEDIUM FLAME-DO NOT BROWN THE ONIONS.

ADD ALL THE VEGETABLES AND SAUTE UNTIL JUST TENDER. SWITCH OFF FLAME AND RESERVE VEGETABLES ON A PLATE.

ADD REMAINING VEGETABLE OIL (2 TBSPS) TO THE SAME PAN ON A MEDIUM FLAME. ADD THE REMAINING ONIONS AND GARLIC AND COOK UNTIL SOFT AND FRAGRANT ABOUT 2-3 MINUTES, STIRRING TO PREVENT BURNING. STIR IN CANNED AND CHERRY TOMATOES, 2 CUPS OF WATER AND CHIPOTLE AND SIMMER UNTIL BUBBLY.

ADD SALT, MORE CHIPOTLE OR HABANERO SAUCE AND IF THE TOMATOES ARE SOUR SOME SUGAR TO TASTE AND RESERVE.

GREASE A 9 BY 13 BAKING DISH LIGHTLY WITH VEGETABLE OIL. CRUSH THE TORTILLA CHIPS AND SCATTER AT THE BOTTOM OF THE PAN AND PRESS DOWN TO CREATE A FLATTISH SURFACE.

TOP WITH THE BEANS AND COOKED VEGETABLES.

POUR TOMATO SAUCE OVER THE VEGETABLES.

USING A FORK GENTLY PRESS INTO THE LAYERED CASSEROLE AND MOVE THE FORK ABOUT JUST A LITTLE TO ALLOW THE SAUCE THE FALL TO THE BOTTOM OF THE PAN.

COVER WITH FOIL. MAKE SMALL HOLES IN THE FOIL WITH A FORK AND LET STEEP 1 HOUR.

BEFORE YOU PUT THE DISH IN THE OVEN OPEN THE FOIL AND CHECK THAT THE SAUCE HAS PERMEATED TO THE BOTTOM LAYERS AND SOAKED THE TORTILLAS. 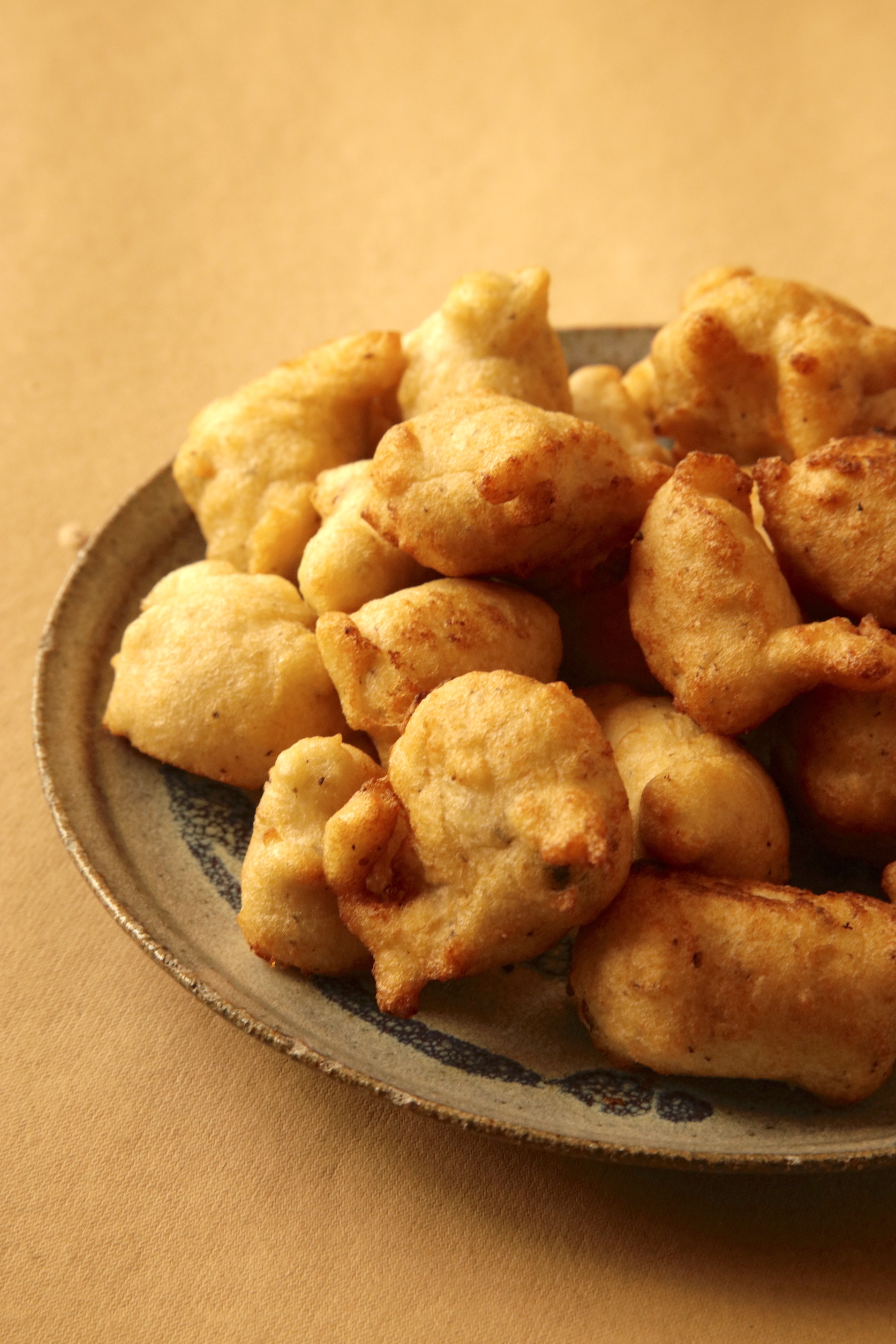 This strange sounding fritter is the Konkan version of the South Indian doughnut shaped vada, made with white Urad Dal. They are easier to make than vada’s because they don’t require shaping. Served as a snack with tea instead of ‘biscuits’, they cook very quickly but should be served straight out of a fryer.

Adding lentils with skin on makes the fritters crispier.

4 tablespoons black urad (urad with the skin on) (optional)

2 tablespoon grated white coconut, if using defrosted squeeze all liquid out of it

Wash and soak both urad dals together in excess water for 2.5 hours . Wash and drain completely.

Grind to a smooth paste 5-7 minutes, turning the motor on an off to scrape the insides with a spatula. Add water, a tablespoon as a time (max about 1/4 cup) to produce a thick, fluffy and creamy batter. The batter should not be runny. You should be able to scoop it up with a spoon.

Stir in coconut, curry leaves, ginger and salted green chillies. Taste for salt. If you are serving these with a salted chutney adjust levels accordingly.

Heat 2-3 inches of oil in a small wok or kadai on medium flame.

Drop 1 tablespoon of batter into the hot oil. If it sizzles and rises to the top the oil is ready for use.

Cook the first fritter till golden brown, drain, cool 1 minute and taste to make sure the insides have cooked through. The interior should be spongy.

Using a serving spoon drop about 1 tablespoon in the rough shape of a ball into the hot oil, holding the spoon close to the oil as possible. Fry till golden on all sides. Fry 4-5 at a time or as many as you are comfortable handling but do not over crowd the kadai. 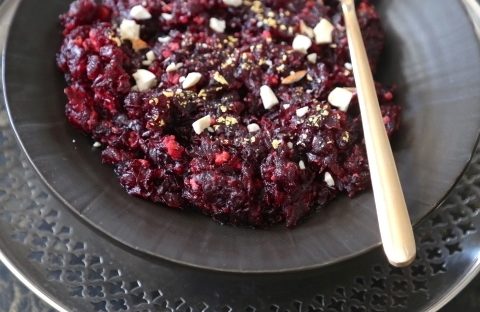 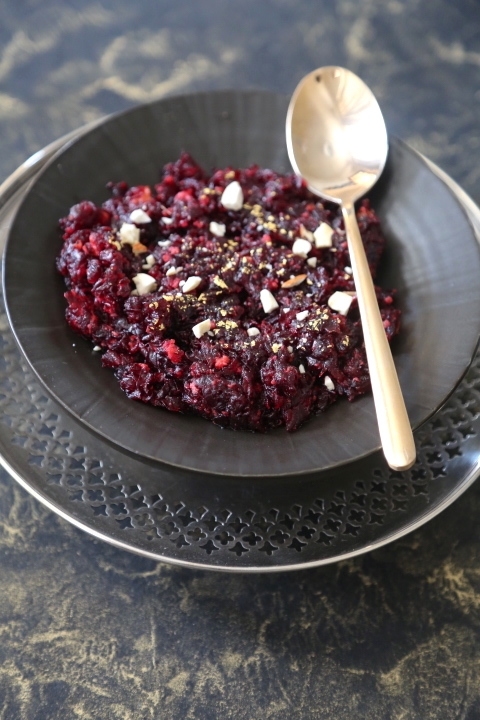 Beetroot adds color to any Diwali table. Its gorgeous hue is enhanced by a touch of silver or gold dust.

I prefer to use thickened milk to make Halwa because its speeds up the cooking process. In Indian in hot October weather milk, can sometimes split when overcooked.

• STEAM THE BEETS ABOUT 20 MINUTES UNTIL TENDER.

• COOL THEM AND PEEL. GRATE THE BEETS USING A GRATER ON A MEDIUM PLANE.

• HEAT GHEE IN A LARGE NON-STICK SKILLET ON MEDIUM HEAT. ADD BEETS, ONE CUP WATER AND SAUTE 4 MINUTES. ADD ½ CUP SUGAR AND CONTINUE TO SAUTE 10 MINUTES UNTIL LIQUID BEGINS TO DRY UP AND MIXTURE REDUCES IN VOLUME.

• TASTE BEETS FOR DONENESS. THEY SHOULD BE SOFT. IF NOT ADD SOME WATER AND CONTINUE COOKING.

• COOK ANOTHER 7 MINUTES ON LOW HEAT UNTIL MIXTURE BEGINS TO THICKEN.

• STIR IN CARDAMOM. STIR IN MAWA. MASH THE MAWA INTO THE HALWA USING A FORK AND COOK 3-4 MINUTES. TASTE AGAIN FOR SUGAR AND ADJUST. SWITCH OFF FLAME.