“Everything you see, I owe to spaghetti.” Sofia Loren 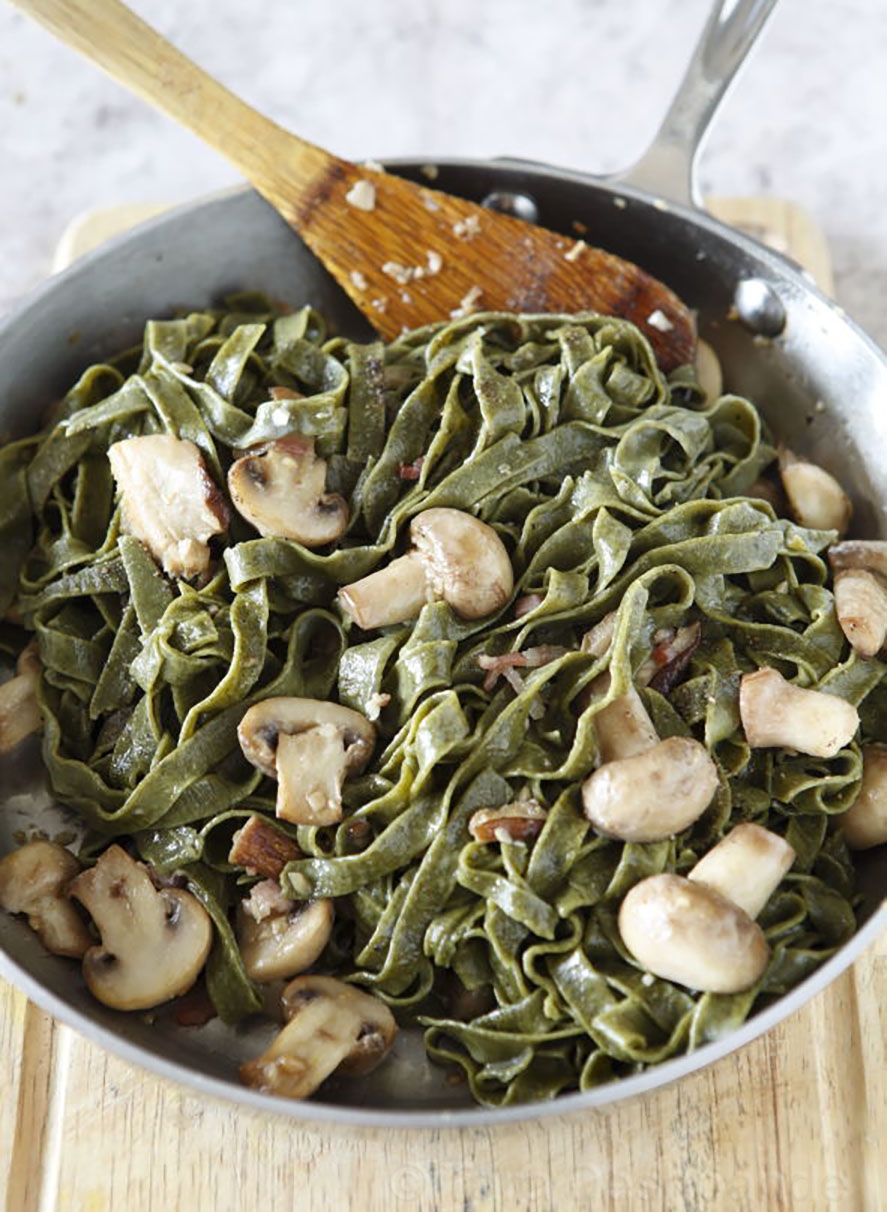 Spinach Fettuccine with Mushrooms and Garlic| Photo by Binaifer Barucha

I began making pasta from homemade dough after my first trip to Italy. One cold and windy night in Rome my mother-in-law was down with the flu so we decided to stay in for dinner. Daniel, my husband and I walked down the street our apartment was on, in the Trastevere, a charming neighborhood in the 13th rione of Rome, past the Piazza di Santa Maria and down Via del Moro. This led us to a small shop, Pasta all’Uovo that sold fresh, uncooked pastas by weight. When we walked in two ladies were still rolling Tortellini, a kind of stuffed pasta with alarming dexterity that can only come with a lot of experience.

The street outside our apartment in Trastevere, Rome | @Tara_Deshpande

The fresh pasta had this luxurious heaviness and a great smell that boxed and dried pasta does not. I had a hard time not buying every kind of shape they sold but we eventually decided on two Primi Piattos or first courses -some gnocchi, a nub shaped dumpling made from potatoes and Tagliatelle, a flat, ribbon noodle, shorter and thinner than Fettuccine.

Spinach Fettuccine with Mushrooms and Garlic

If you have fresh pasta you also need good cheese and wine.  A quarter pound of Pecorino and Parmigiano-Reggiano, a bottle of local Castelli Romani and an array of antipasti including a Rome specialty, cheesy fried zucchini flowers called Fiori di Zucca from the Antica Caciara Trasteverina and we were well armed for dinner. I remember being so excited by the prospect of actually cooking pasta in Italy! 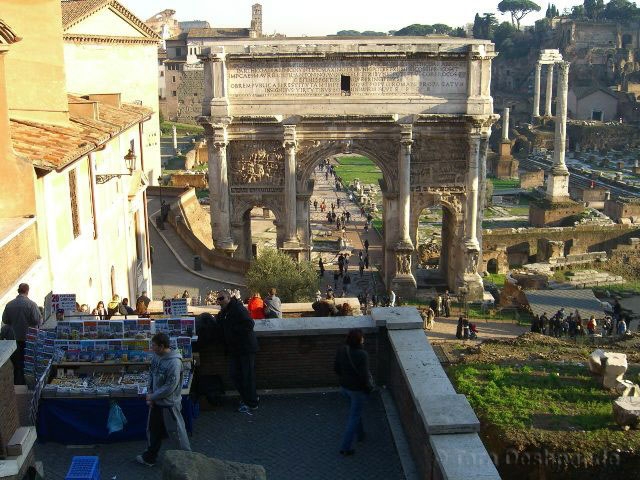 The Trastevere neighborhood in Rome | @Tara_Deshpande

Gnocchi, technically is not pasta but a starchy dumpling. It is served as a main course but also as a Contorno or side dish. I tried to imitate gnocchi I’d eaten at 112 Eatery, a restaurant in Minneapolis, Minnesota that is favored by some very well known chefs (so you can imagine how good it is). I am guessing they pan fried the little morsels in butter and olive oil and then tossed them with Parmesan. For the strand pasta, we made a classic Roman Cacio e Pepe with black pepper and Pecorino.

And as if this wasn’t enough we threw together a salad of San Marzano tomatoes and fresh basil from a previous shopping excursion. These quirky, misshapen tomatoes are considered by gourmands to be the finest. The meal was manna from heaven and many years and trips later still our most memorable in Italy. 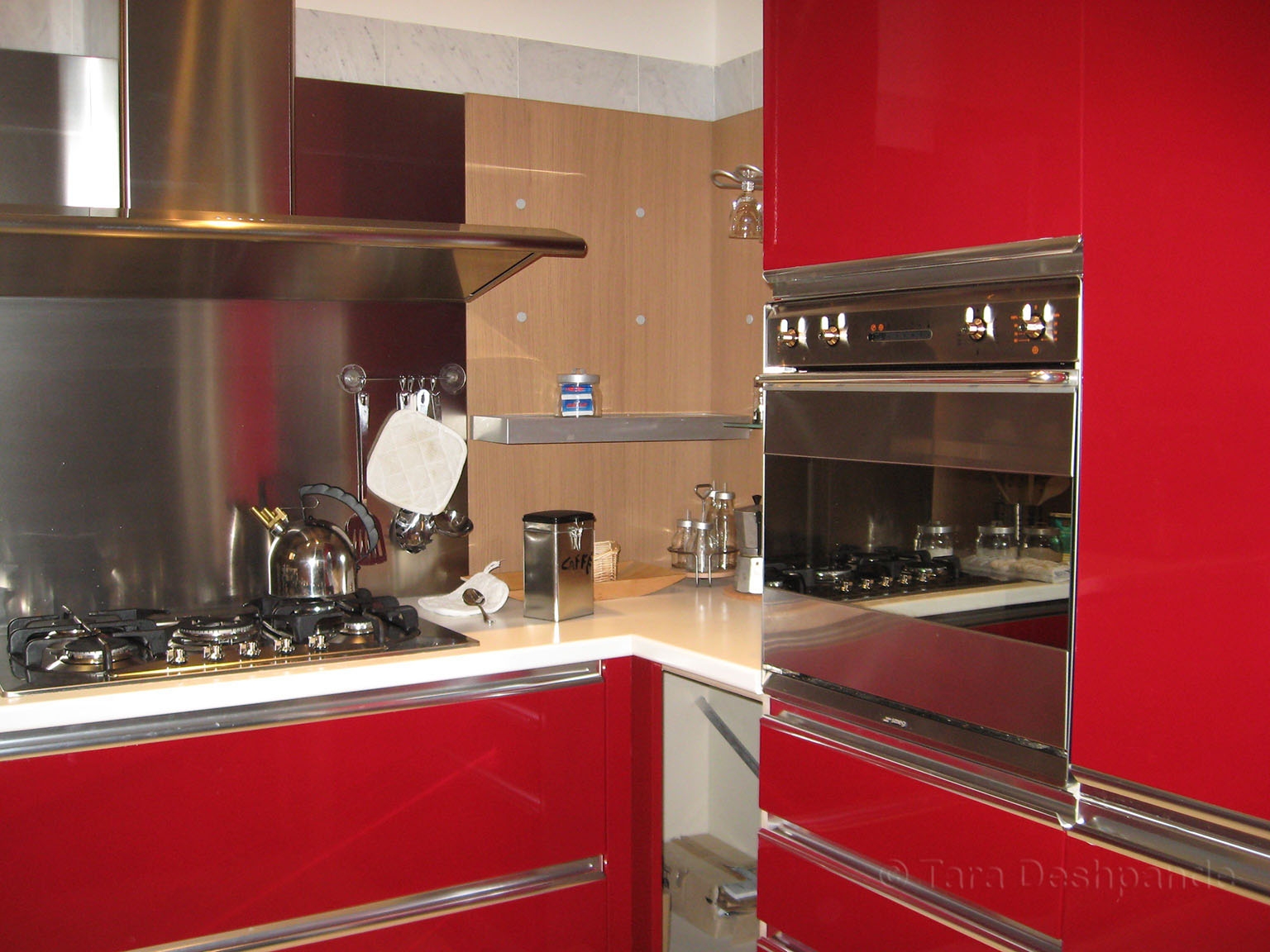 Our kitchen in Rome | @Tara_Deshpande

“On the palate it has a gossamer, soft touch that no other pasta can duplicate.” Marcella Hazan, the maven of Italian cooking writes in ‘Essentials of Classic Italian Cooking’ about the virtues of handmade pasta over factory bought.

Undoubtedly a plump, hand crafted ravioli, a buttery, soft agnolotti and homemade spinach fettuccine will spoil you forever. If you make them often enough you will almost always know which kind you are eating when you go out to a restaurant.

Like curry, pasta’s journey into the world’s kitchens has been a long and fascinating one. Contrary to popular belief, Christopher Columbus did not bring pasta to Italy from China. He mentions pasta-like noodles in the Far East, in his 15th century chronicles but the Estrucans (now Tuscany in Italy) were making precursors to modern pasta, a kind of bread cake since 400 B.C. 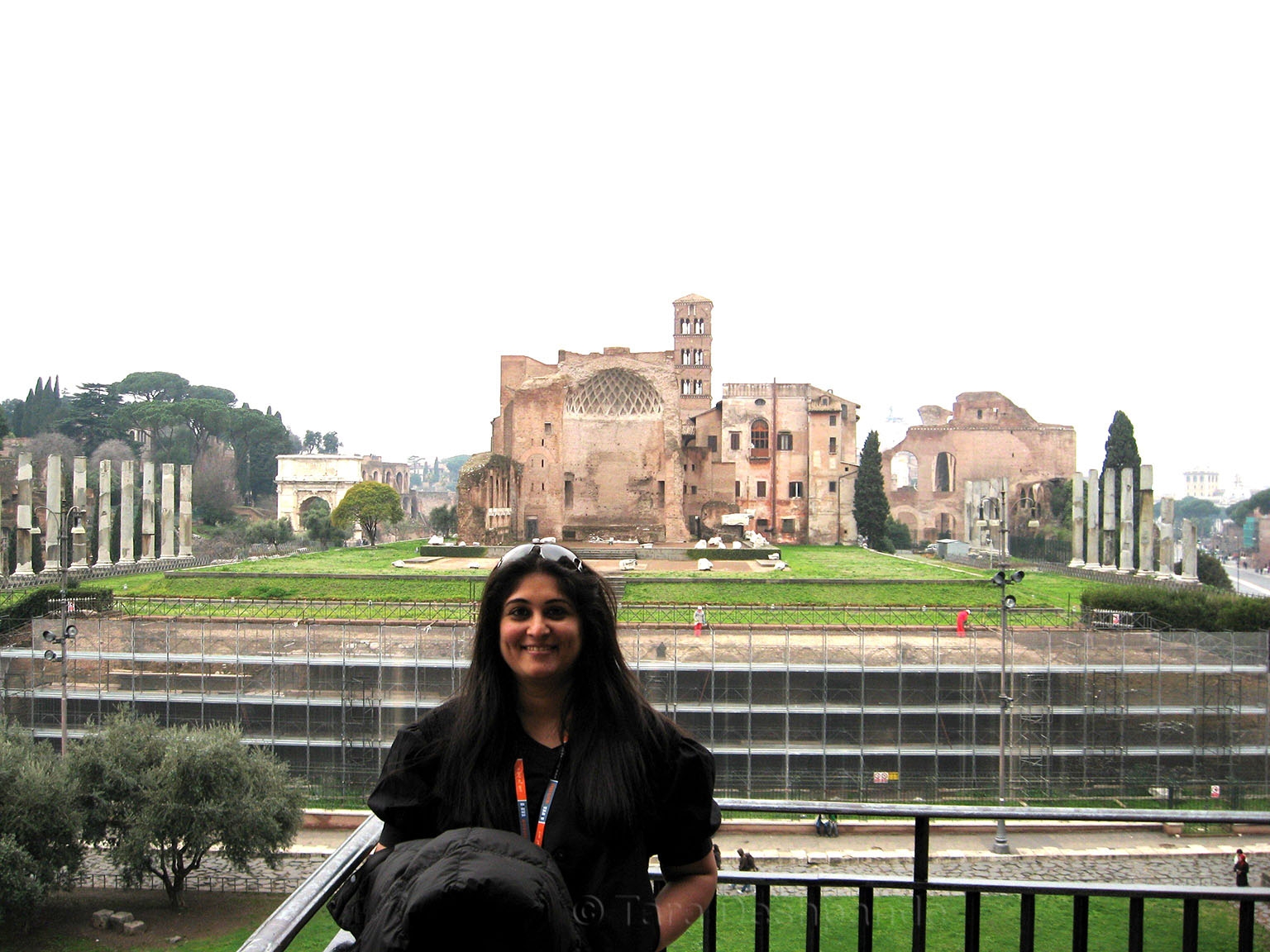 Tara outside the Colosseum | @Tara_Deshpande

It is argued instead that pasta came to Naples from Greece. In Greek mythology the earliest reference to pasta mentions the smithing god Hephaestus who fashioned a gadget that could cut strings of dough. Modern day Italians use an instrument called Chittara to make ribbon pasta.

Clowns dressed up as Pulcinellas. These Neopolitan characters were often shown eating pasta

Interestingly it was only in 1740, in Venice that Paolo Adami was granted a license to open the first pasta factory, even though pasta machines had become popular since the 1600’s and pasta was being produced industrially since the mid 1500’s.

Gragnano, a town in Campania is the birthplace of dried pasta. Here pasta is run through bronze plates and hung out to dry, like laundry in the salty Mediterranean air.  But it was the artificial drying process, which only became available to all of Italy in 1914 that eventually made it possible to export pasta the world over, on such a large scale.

So when Thomas Jefferson, credited with introducing Americans to pasta and Parmesan cheese imported cases of Macaroni back in the early 1800’s, pasta was a novelty and a luxury. Jefferson enjoyed Macaroni in Paris, where he was Ambassador in 1784, so much he had served it at official dinners when he became President.

Pasta has an illustrious history but don’t let that intimidate you. What has made it so beloved the world over is that essentially, like bread, it’s a humble dish of flour and water. A dish you can make anywhere, especially in India where a variety of good quality flours are easily available. You can even go to a chakkiwallah and have him grind your flour fresh, very inexpensively. Freshly ground flour is fragrant and adds flavor to your pasta.

Pasta can be made at home without expensive ingredients or hard to find gadgets. You need flour, water and a good sauce. Some recipes call for eggs while others are eggless and pure vegetarian. Some are gluten free, made with buckwheat and others with fine rava (semolina flour) or boiled potatoes. Accompanied by robust and healthy sauces from fresh tomatoes and sautéed vegetables, pasta will become a regular in your weekly menu. You will also discover that you can experiment a great deal with what goes into your dough, sauces and fillings. 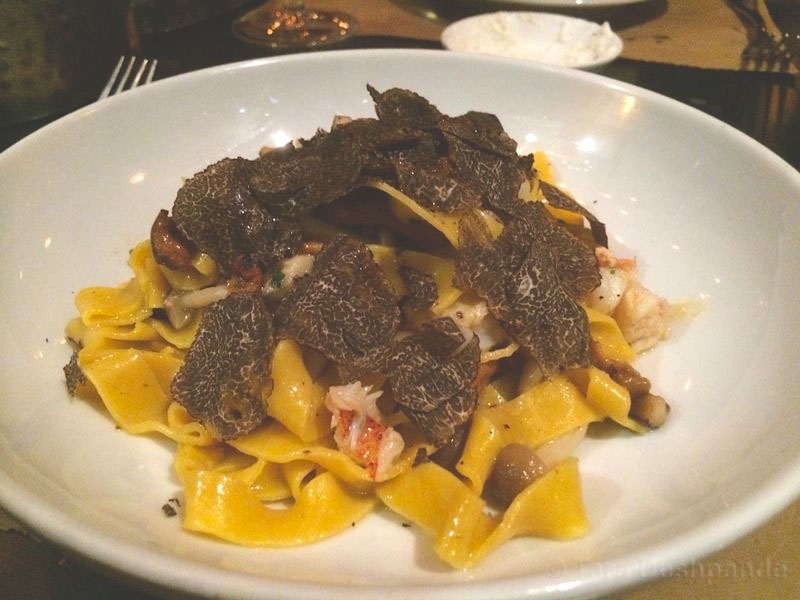 When I returned from Italy to New York I took a class at the International Culinary School and have been making fresh pastas at home ever since. In the USA one had to be careful to prevent the pasta dough from drying out too quickly, before it was rolled. In India, the humidity causes the pasta to get too wet so it’s essential to keep extra flour and semolina around for dusting and dry cloths for covering. Working in a well-ventilated space is also recommended.

Pasta making may seem daunting but for Indians who have grown up with belans and polpats it shouldn’t be. Pasta dough, unlike pastry can be handled with a similar ferocity reserved for paranthas and theplas. It’s also a lot more resistant to heat than pastry, which is an advantage in a hot country.

If you have ever rolled chappatis, learning to roll sheets of pasta with a rolling pin will come to you more easily. If you’ve made Kerala parothas or Roomali rotis, stretching the dough too, will seem familiar. 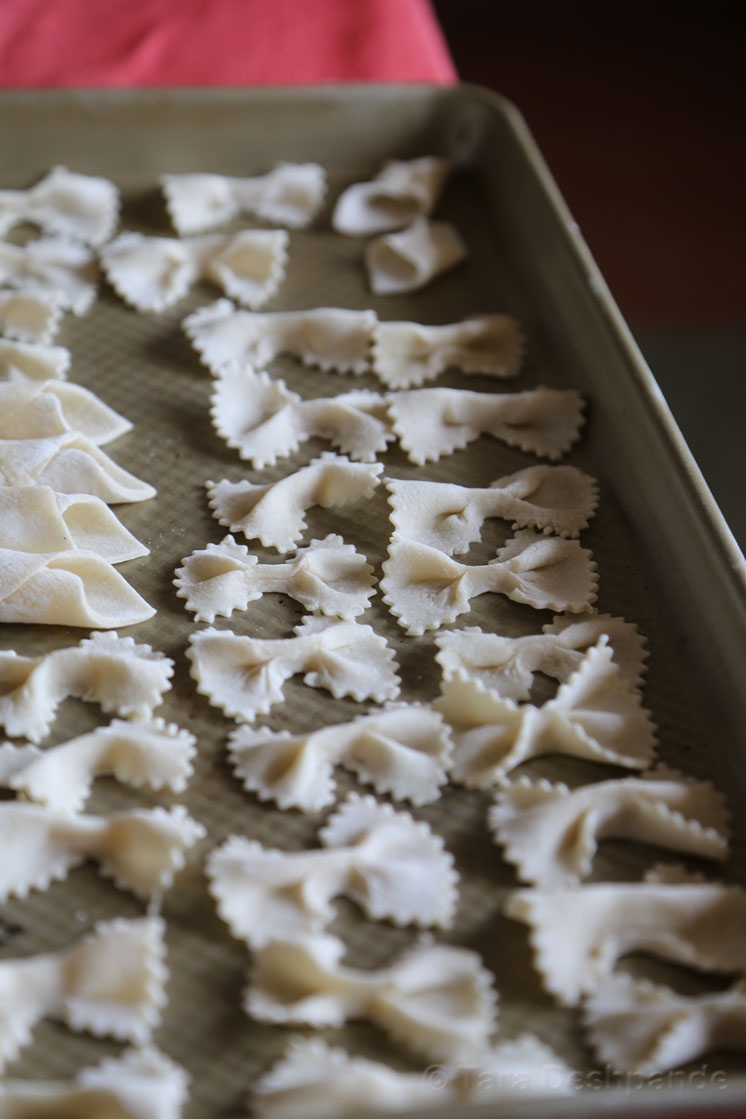 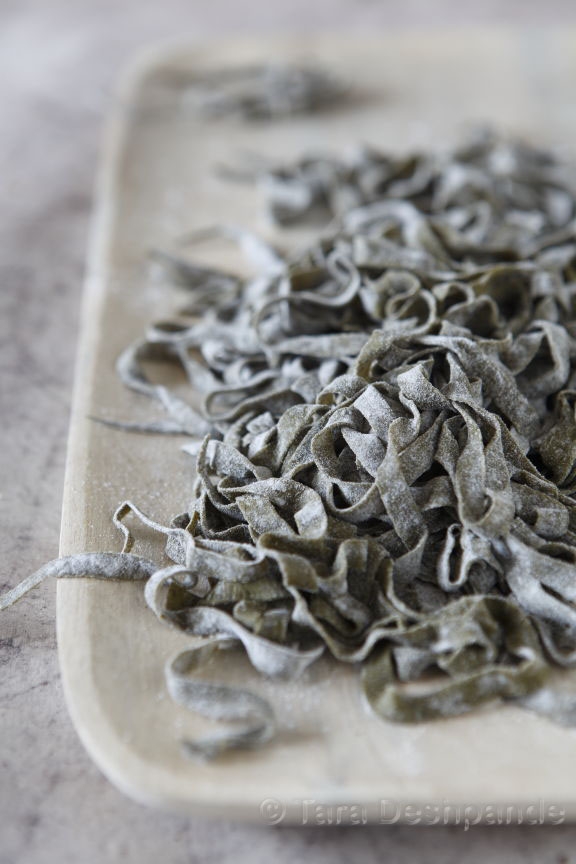 PASTA FLOUR
Our Indian low gluten Maida, the closest equivalent to all-purpose flour produces very good pasta. Flours vary by the kind of wheat they are made from, how finely ground they are and how much gluten they contain.

In Italy double zero or ‘doppio zero’ (00) an extremely fine flour is used to make egg pasta. 00 flour is easy to knead and produces a tender and flexible pasta noodle and is also used to make pizza. But it’s also a highly refined product.

Durum wheat semolina, a course flour that’s a lot like our fine rawa or sooji is used to make egg-free pasta as the coarser texture gives the pasta more body and resilience.

Harder wheat like whole wheat flour or Atta has more protein, fiber and gluten and is better for bread making while Maida is lower in gluten and perfect for making cookies, cakes and pasta.

HANDMADE vs HANDCUT PASTA
There are two kinds of homemade pasta; handmade and hand-cut.  In handmade pasta you roll your homemade dough, stretch and slice the dough manually, while in homemade pasta you make your own dough, then roll and cut it using a hand crank machine.

The machine is easiest. You prepare the dough, knead it well, set your blades and run it through the machine.

Pasta machines are heavy but available inexpensively online. I bought mine, weighing about 3.25 kilograms for $67 on Amazon and carried it back as hand luggage. You can find a similar machine for less right here 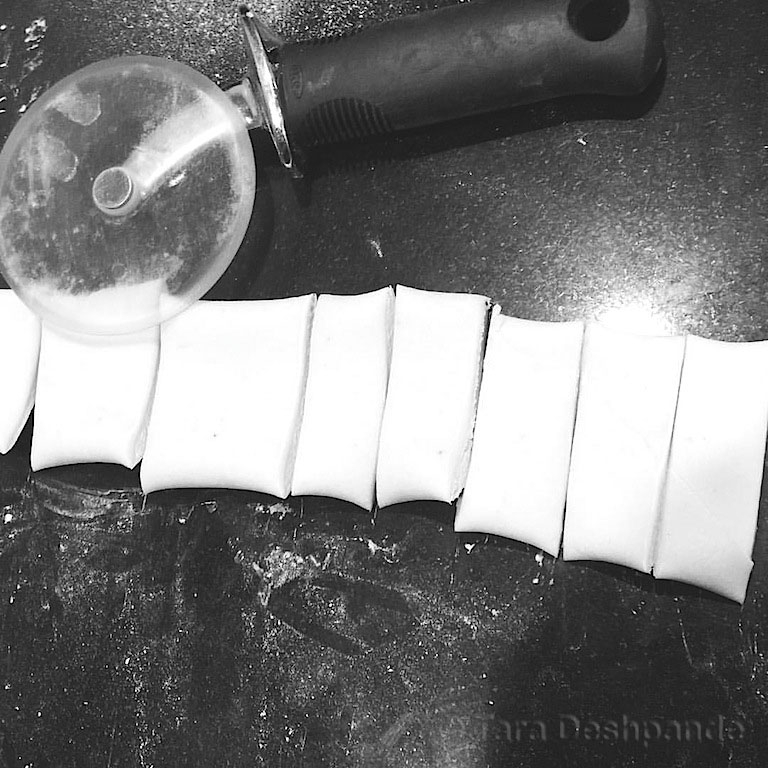 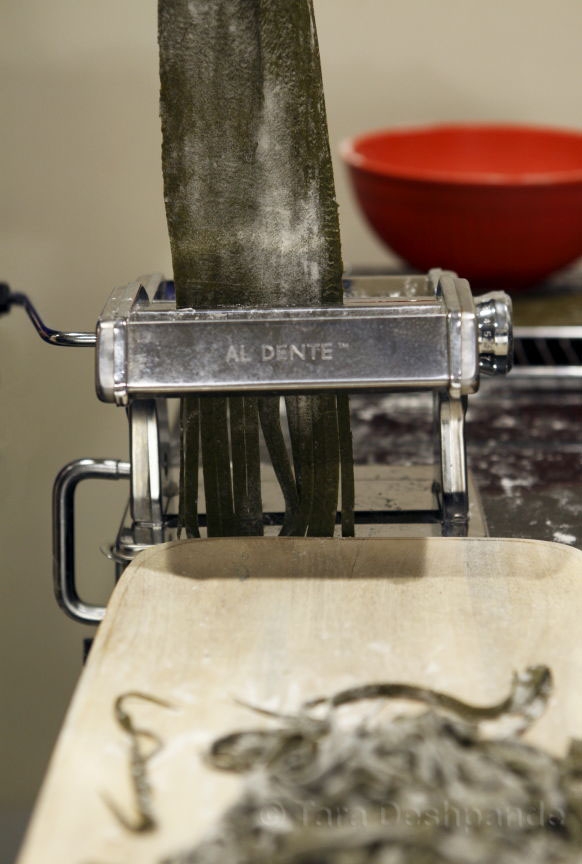 SHAPES AND SAUCES
Pasta’s first function is to deliver a sauce. The shape of your pasta determines the sauce most suitable for it and Italy has a huge variety; stuffed, flat, mini, long, short and rough cut pastas and then some.

The thick stands of Pici are ideal for a robust Marinara sauce while a pesto is delicious with the corkscrew shaped Cavatappi. Some pastas like Ditalini are good in soups and Conchigliani is excellent for stuffing.

Pasta dough is mostly flour and water with the addition of eggs, a vegetable, flavoring, herb or spice if you don’t want plain pasta.

Pastas are also made without eggs like Maccheroni, while some like Bigoli and Pizzocheri can be made with buckwheat and Passatelli is prepared with breadcrumbs and Parmesan. 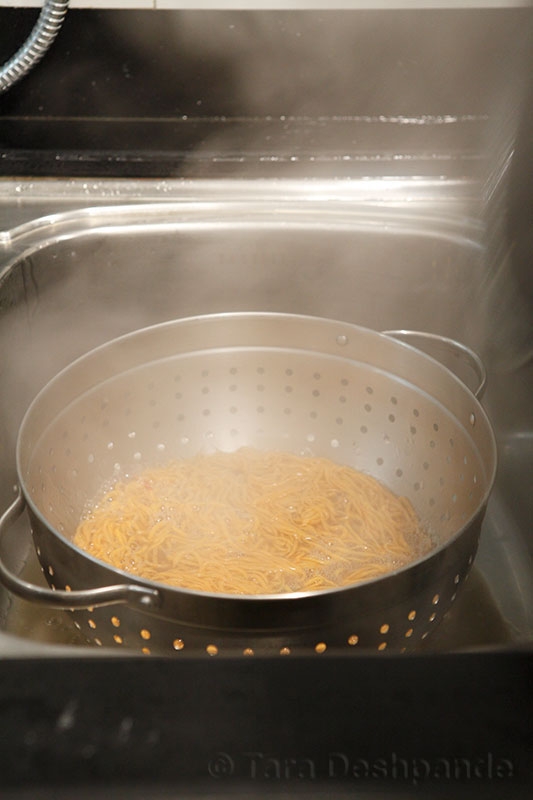 DRYING
Pasta is best dried in the open and not in a refrigerator.  This doesn’t apply to stuffed pastas. You can cook handmade pasta before it dries also and it will cook much faster, but in general any kind of home-made pasta tends to cook faster than the ones you buy in boxes. Strands of pasta can be dried on a traditional pasta stand, cookie racks even laundry racks. Ideally dry it in a clean, well lit and ventilated space. 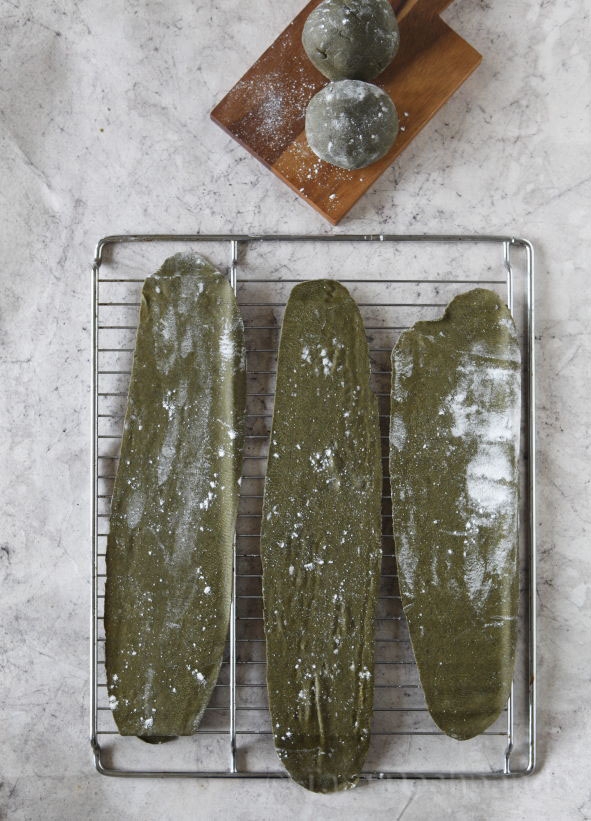 Making your own dough ensures freshness and quality and you can make something just a little different like this Beetroot and Carrot Taglierini. 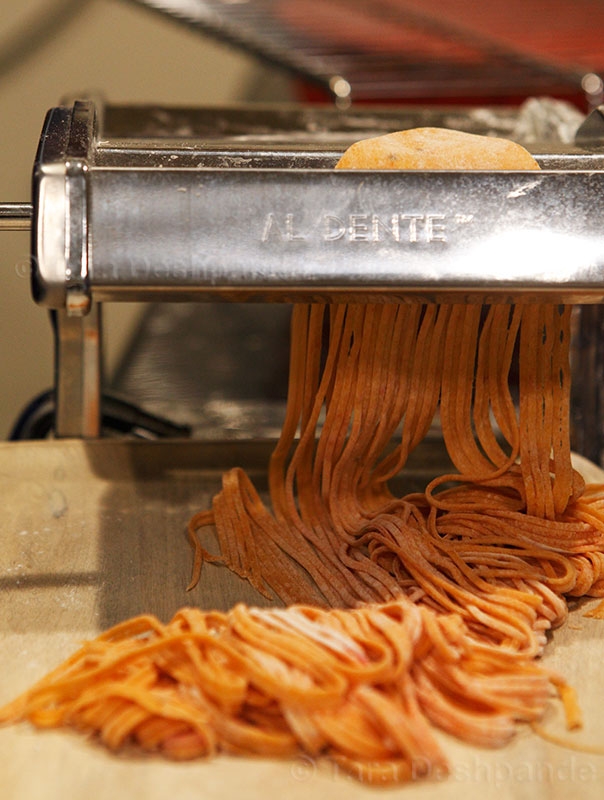 However, making pasta is a labor of love. No matter how good you are it requires time and energy. But I promise you, the effort is worth it.

Spinach Fettuccine with Mushrooms and Garlic

Beetroot and Carrot Cappellini with Basil, Pine Nuts and Parmesan