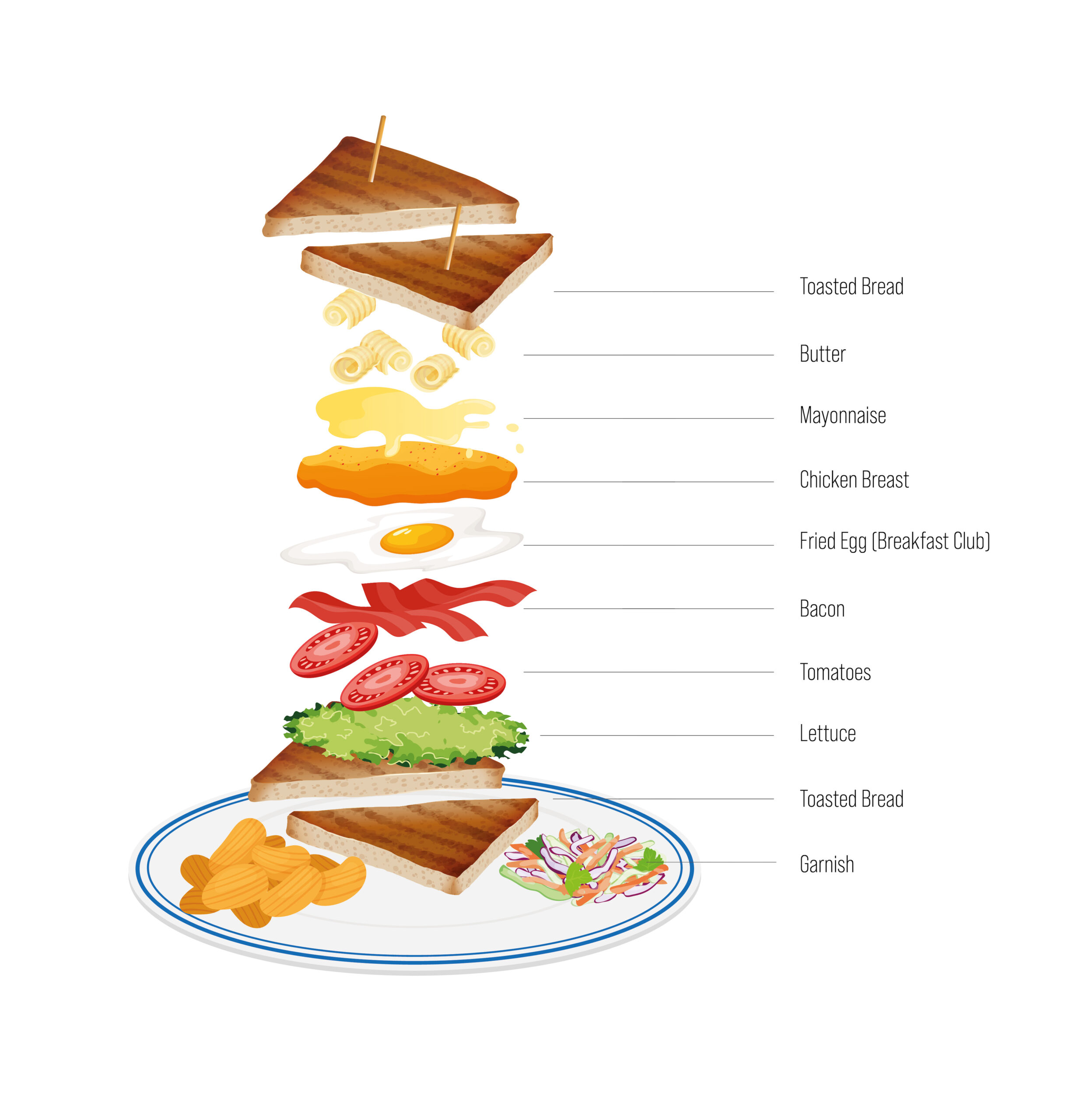 It’s been a long time since I ate a club sandwich. A post by @freddybirdy brought back vivid memories of Sunday afternoons spent with my father and sister, splitting a club sandwich at the Willingdon club poolside. He always drank a beer with his half of the sandwich and my sister and I shared a milkshake. After a long swim or in my case splashing about like a duck it was either waffles or a club sandwich.

Always composed with toasted white bread, ham or bacon, slathered with Willingdon’s signature homemade sharp mustard and sweet mayonnaise, they were substantial triple decker sandwiches; one of the reasons the Club Sandwich fell out of favour in the late nineties as diners became more calorie conscious.

But for me it’s more about my Papa than the sandwich. As kids we giggled mercilessly watching him eat the club sandwich with a knife and fork. All the other grown up’s we knew ate it with their hands like a burger.

Two decades after Papa’s death, I stumbled upon Florence Cowles’ epochal cookbook on the humble sandwich “Seven Hundred Sandwiches (1929) and lo and behold she writes about the club sandwich-

“The sandwich should be eaten with knife and fork.”

Cowles’ colossal compendium cookbook began as ‘700 sandwiches’ and the last edition was published as ‘1001 sandwiches’. The book has 17 different recipes for club sandwiches including an open club sandwich and a five course club sandwich, which I believe only an Uruk-hai could digest. Cowles is very specific about its contents.

She writes-
“The club sandwich is here to stay. It is a meal in itself, and a meal which may have highly diversified component parts, as long as the principal specifications of toast, meat and salad ingredients are adhered to.”

The club sandwich, a bountiful sandwich of toasted bread, turkey or chicken, tomatoes, lettuce and bacon was possibly created in a club somewhere between 1890 and 1899. The private members only Union Club, once one of New York’s most elite establishments claims to have birthed this delight. The Saratoga a gentlemen’s only club in upstate New York also stakes its claim. They also claim the potato chip was created here.

The modern club sandwich is a departure from the original version and many more gourmet and complex club sandwiches have made their way into our take out menus and luxury hotel cafeterias since the late eighties.

Marion Neil’s 1916 book Salads, Sandwiches, and Chafing Dish Recipes, a book I’ve cooked from successfully in the past, postulates on the origins of the sandwich but concurs with Cowles on some of its attributes.

Neil believes a club member and not a club chef created the sandwich and liked it so much he shared it with friends who were members at other clubs and the sandwich soon became a club staple. So much for the old boys network.

It doesn’t surprise me that the club sandwich should be invented in a gentlemen’s club because it was in a club called Hells Fire in 1762 that John Montagu the 4th Earl of Sandwich, a reckless gambler, engrossed in an all nighter called for slices of bread and meat at the stakes table. His companion gamblers loved this slapdash meat and bread meal which must have been completely irreverent to picky Georgian table manners and began calling for it on the menu.

Some say the story is apocryphal however in 2004 the 11th Earl of Sandwich confirmed the story while advertising a new chain of sandwich restaurants in partnership with the CEO of Planet Hollywood.

The earliest known reference to the club sandwich appeared in The Evening World in 1889: “Have you tried a Union Club sandwich yet? Two toasted pieces of Graham Bread, with a layer of turkey or chicken and ham between them, served warm.

Graham bread created by the makers of Graham Cookie was a light healthful brown bread. The original sandwich was not made with white bread.

The Pittsburgh Dispatch 1889 and the New York Sun 1889 also describe the Union Club’s Club Sandwich as a real novelty the recipe of which had been a secret hitherto.

But there are others who disagree with the club theory. They theorise the sandwich was called a double decker because it originated in the double decker club cars (early train service) on the East coast and appears on railroad menus dating back to the late 19th century.

The New York, New Haven and Hartford Railroad menu served the club sandwich as a main course. The Pennsylvania Railroad offered it alongside several other sandwiches while Steamer ships like the Fall River Line also boasted a club on their menu.

The sandwich appears on an 1899 menu of the Century Club in Cleveland, a 1900 menu of the Manhattan Club, 1917 Yale Club menu, even on a very high end menu in 1914 at the Waldorf Astoria Hotel.

By the 1920’s club sandwiches were wildly popular. King Edward VIII it is said loved the Club Sandwiches his wife Simpson made for him. So beloved was this sandwich that The Sandwich Tribunal cites a heated argument in the U.S House of Representatives in 1930 with samples of club sandwiches being flourished around to determine, which one was the best value for money. Mothers were encouraged to send their kids to school with packed club sandwiches.

“Club Sandwich
Does your little one go to school and take a lunch? If so, prepare a club sandwich for the luncheon basket. Cut the bread in thin slices, toast and butter. Slice the white meat from a roast chicken, salt, pepper, and add a dash of mustard to suit taste. Put between the layers of chicken a slice of broiled breakfast bacon, not too well done. Lay next to toast two pieces of crisp lettuce, and you have the most palatable as well as healthful thing in the way of sandwiches.”
New York American 1898

Another interesting recipe that replaces the middle layer of bread with a lettuce leaf appears in The Good Housekeeping Everyday Cook Book (1903), by Isabel Gordon Curtis.

Club Sandwich – Toast a slice of bread evenly and lightly butter it.  On one half put, first, a thin slice of bacon which has been broiled till dry and tender, next a slice of the white meat of either turkey or chicken.  Over one half of this place a circle cut from a ripe tomato and over the other half a tender leaf of lettuce.  Cover these with a generous layer of mayonnaise, and complete this delicious “whole meal” sandwich with the remaining piece of toast.

The earliest club sandwiches were double deckers; they had only two slices of light brown bread. The third slice appears in recipes after World War 1.

The first mention I was able to find of a triple decker club was a supper menu of the Gramercy Park Hotel in NYC circa 1920’s.

In 1972 James Beard American chef and food writer decried  club sandwiches that departed from the original version. In his book, James Beard’s American Cookery he writes-

. . . it is one of the great sandwiches of all time and has swept its way around the world after an American beginning.  Nowadays the sandwich is bastardized because it is usually made as a three-decker, which is not authentic (whoever started that horror should be forced to eat three-deckers three times a day the rest of   his life)”

The triple decker was always served with two toothpicks to help keep the layers from toppling over.

The club sandwich is commonly served with an accompaniment of either coleslaw or potato salad and often garnished with a pickle though in later years these were replaced with potato chips and lettuce. Adaptations like began almost immediately. some cookbooks suggested removing the crusts, other cut their slices into triangles while some turned the club sandwich into a do it yourself buffet.

“The Coogler sandwich consists of a slice of ham, two slices of pickles and a slice of turkey placed between thin pieces of light bread, along with a slice of tongue and an artistic touch of mustard. The sandwich will be copyrighted by the Coogler Club.”

“This is a miniature course dinner, beginning with fruit cocktail and ending with a sweet. Cut six thin, round slices of bread, the smallest an inch and a half in diameter and the largest four inches. Lay the largest slice on a plate and spread with jam. On it lay the next largest slice of bread and spread with cream cheese. Then the next slice, buttered, and on this lay bacon or chicken with lettuce and mayonnaise. On the fourth piece of bread lay a slice of tomato and on the fifth a slice of cucumber, each slice of bread being buttered and each vegetable having a bit of mayonnaise and lettuce. On the top piece of bread, unbuttered, lay a slice of banana or other fruit and crown with a stuffed olive. If the layers prove topply they may be secured with toothpicks, but avoid this if possible.”

THE MANY LAYERED CLUB SANDWICH