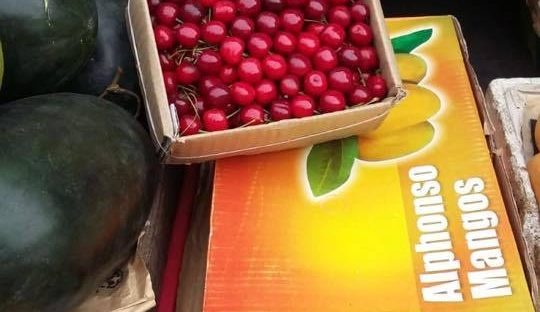 Cherries are grown in colder climates all over the north and north east of India. In Nagaland they have a unique history. In 1944, the Japanese 15th army occupied Garrison Hill in Kohima, Nagaland. They used a cherry tree near by for sniper practice. What followed was one of the greatest wars ever fought. A small band of British and India troops besieged and outnumbered, halted the Japanese invasion of India. A branch grafted from this cherry tree now lies over the memorial commemorating the sacrifice of 917 brave Indians. Yet many Indians have never heard of ‘The Battle Under The Cherry Tree’.

In the USA some cherry varieties hold meaningful stories. Seth Lewelling, a Quaker and Abolitionist introduced the The Black Republican cherry in 1860. He was largely responsible for founding Oregon’s cherry industry. He named this fruit in honor of the Black Republicans, members of the Republican Party who opposed slavery.

India grows many varieties of cherries but only a few ever get to the markets in the big cities and that too for a very brief period. Cherries are great in salads, make superb jams, can be added to roasted meats and pureed to make gelato and sorbet.

Here is a simple green salad with seasonal cherries that pair wonderfully with toasted walnuts.

3 cups rocket or arugula, washed, stalks removed or a green of your choice

Juice of one lime

1 tsp mustard paste (such as Dijon)

1. Whisk together all the ingredients for the dressing and refrigerate for an hour or overnight.

1. Combine all the ingredients for the salad in a large bowl. Pour the dressing over the contents of the bowl. Toss, taste for seasoning and serve immediately.