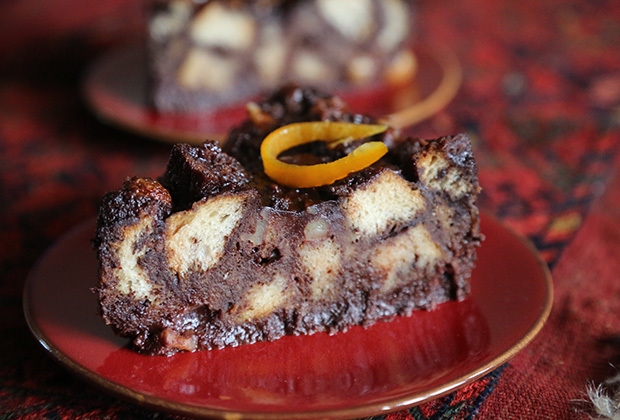 India’s brief season for stone fruits is overshadowed by mangoes. This year, give succulent peaches, cherries, golden apricots and plums the love they deserve. I promise you won’t regret it.

“When I sound the fairy call, gather here in silent meeting,
Chin to knee on the orchard wall, cooled with dew and cherries eating.
Merry, merry, take a cherry, mine are sounder, mine are rounder,
Mine are sweeter for the eater, when the dews fall, and you’ll be fairies all.”
― Emily Dickinson

In the 15th century, botanist John Tradescant was so desperate to procure Algerian apricots that he attacked a ship of Barbary pirates. Sadly, the passion for stone fruit in India is reserved for mango, a fruit that completely eclipses all others. Stone fruits are drupes with a fleshy exterior that encases a hard pit. The season for cherries and apricots is gone in a flash so go out and grab as much as you can. Tasty as the fresh fruit, you can liven up your menu with some of these innovative recipes. Stone fruits make for great jams and squashes, but are also superb in salads, sauces and salsas.

In Mumbai, you will find some of these fresh stone fruits at Crawford Market, Dadar, Vasai and Colaba market(s). Fresh and ripe apricots and cherries should be tender, vibrantly coloured but without mushy patches and bruise marks. The stone fruit season is generally between the third week of May and the first week of July. Once you’ve purchased them, wash and sort them quickly. Eat or cook with the ripe ones immediately and keep an eye on the fruit that’s still raw. If they don’t show signs of ripening, cook them up into a jam or squash or one of the recipes below. Unripe stone fruit can be very sour so adjust your seasonings accordingly. For more on peaches, plums and green almonds refer to the first article of the series.

Cherry: USA and Turkey are major producers of sweet and sour cherries. India’s crop is mostly sweet and comes from Himachal Pradesh and Kashmir (more expensive). The flavours and colour vary dramatically even by the box. White Heart, Black Republican, Early Rivers from Himachal and Black Heart and Early Purple are names that are not familiar to most of us because even though India grows nearly 100 varieties, we almost have never seen more than a couple in Mumbai’s markets.

In 1944, the Japanese 15th army occupied Garrison Hill in Kohima, Nagaland. They used a cherry tree near by for sniper practice. What followed was one of the greatest wars ever fought. A small band of British and India troops besieged and outnumbered, halted the Japanese invasion of India. A branch grafted from this cherry tree now lies over the memorial commemorating the sacrifice of 917 brave Indians. Yet many Indians have never heard of ‘The Battle Under The Cherry Tree’.

Apricots: The Sogdians of Parthia, ancient Zoroastrians were the first to cultivate apricots. The Persians called them ‘the seeds of the sun’. Bertrand Russell in In Praise of Idleness and Other Essays mentions that apricots came to India from China in the second century BC during the Kushan invasions. It was from India that the fruit travelled to central Asia. And Confucius is said to have developed his ideology meditating under an apricot tree.

The Romans called the apricot ‘Armeniaca’, the tree of Armenia. In Latin, apricot is ‘Praecocia’ meaning precocious because it is the first tree to blossom after winter.

Today, the fruit is a huge commercial crop in Turkey and Iran. They grow two kinds – the bitter and the sweet kernel. India is a small producer of the exquisite jardaloo, also known as Hunza, after the valley in West Pakistan where they are abundantly cultivated by the Hunzas.

Fragrant apricot nuts are used commercially as almond substitutes, while the cyanide-rich seed extracts were once used in medieval England to treat ulcers and more recently, in controversial cancer drugs.
Jardaloo korma

Recipes for the Indian kitchen

Juice of one lime

1 tsp mustard paste (such as Dijon)

1. Whisk together all the ingredients for the dressing and refrigerate for an hour or overnight.

1. Combine all the ingredients for the salad in a large bowl. Pour the dressing over the contents of the bowl. Toss, taste for seasoning and serve immediately.

Cherries and chocolate are an irresistible combination. I make my bread pudding with the crust on.

1. Soak the cherries in alcohol for 2 hours or the previous night. Refrigerate in an airtight container or glass jar.

2. Remove from the refrigerator and reserve in a heatproof mixing bowl.

3. Toss the cubed bread in a large 12 inch round baking dish about 4 inches deep or adjust the size based on what you have in the kitchen.

4. Heat the milk, cream, sugar and cocoa in a large saucepan on low heat.

5. Stir constantly to prevent burning until the mixture begins to bubble.

6. Add the semi-sweet chocolate and switch off flame. Stir to melt the chocolate.

7. Rapidly whisk in the beaten eggs and vanilla.

8. Use a sieve and strain the chocolate egg mixture over the soaking cherries to remove egg bits. Stir well.

9. Pour over the cubed bread. Press down on the bread to ensure all the cubes are well soaked.

10. Cover and let the bread absorb some of the liquid for about 15 minutes.

12. Scatter the walnuts over the bread pudding and using a flat spoon stir them gently into the pudding.

13. Cover with foil and bake 40 minutes. Remove foil and continue baking another 20 minutes until the custard is soft but set. The pudding shouldn’t ooze liquid.

14. I like the pudding as is, but you can serve it warm with whipped cream, crème anglaise or vanilla ice-cream. 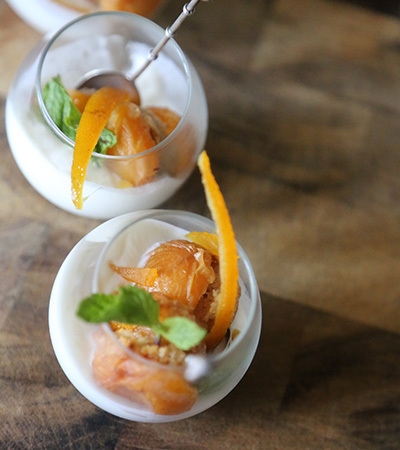 These are delightful. You can serve them in a pie plate straight out of the oven or in chai glasses, shot glasses or little dessert bowls with dessert spoons or cocktail picks.

Apricots can be sour so taste-test your batch before you cook them. If they are sour, choose to serve them with vanilla ice-cream or sweetened whipped cream.

2 tbsp maida or all purpose flour

1. In a small saucepan combine cinnamon with sugar and water and set over a medium flame. When the volume is down to 1 cup switch off flame.

2. Butter the baking dish with 1 tablespoon of butter. Pour syrup into the dish. Remove cinnamon stick.

3. Using a sharp knife, splice open one side of each apricot, cut along the rib, leaving the bottom side intact. Remove the pits.

5. Cream butter and sugar for 1-2 minutes in a stand mixer or using a whisk. Add vanilla and egg and continue to beat about 1 minute. Add zest and almonds until well incorporated.

6. Lightly butter each apricot using the leftover butter and a pastry brush. Spoon the frangipane into the spliced fruit generously.

7. Place the fruit in the baking dish with sugar syrup and bake 40-45 minutes until fruit is blistered and the almond custard is golden brown.

8. Serve warm with some of the browned sugar syrup with boozy cream, strained yogurt or vanilla ice-cream.

I love this curried chicken because it’s so easy to make and kind of imitates the flavour of a korma without all the effort. If you don’t have access to fresh apricots, use dried jardaloo or the Turkish ones. Turkish apricots come pitted and saves you some effort and time.

Salt and sugar to season

1. If using dried apricots, soak them in hot water for 20 minutes.

2. Pit your apricots. Reserve the kernel. Break the kernels using a pestle or a small hammer and reserve the small nuts inside. Discard all broken shells. If you are using fresh apricots, test taste the nuts. The nut of fresh apricots can sometimes be bitter.

3. Puree all the remaining ingredients from 2-11 to a smooth paste. Season with salt and sugar. The flavour should be tangy and a little bit spicy. If your fresh apricots were sour you may need more sugar. Adjust spiciness by adding more red chilli powder.

4. Pour this mixture over the chicken. Add the whole bay leaf, black cardamom and cinnamon pieces and marinade for 3-4 hours or overnight.

5. Preheat oven to 300 F. Place chicken skin side up in a medium oven proof dish about 12 inches by 8 so the chicken fits snugly. Pour remaining marinade over the chicken.

6. Cover dish with foil. Prick foil in a couple of places with a fork to help release steam and bake for one hour.

7. Raise oven temperature to 350 F. Remove foil and continue to bake until chicken is golden brown and cooked through and the sauce is bubbly and thick. Garnish with the apricot nuts and or toasted cashew pieces.

8. Serve with flat breads like naan, roti or parathas.