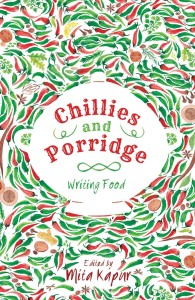 – an excerpt from Chillies and Porridge (Harper Collins India)

By 2050 India’s biggest food war may not be how to feed 400 million more people but how to save them from becoming addicted to junk food.

In a Govandi slum, one of Mumbai’s largest, Shakeela wakes up at 3 a.m. to fill buckets of water. Water will be available at four and the line is already half-a-mile long. A widow, with seven children, she can only carry two buckets. Her eldest Fauziya, thirteen, could have helped, but must remain at home to watch over the others. On her way back, Shakeela stops at a local shop. These are two a penny in Govandi, row upon row of huts with windows showcasing tobacco, beedis, gutka and something else that’s become equally ominous; neon-coloured, child-friendly, imported and local crisps, snacks and aerated drinks. Shakeela will purchase some of these. They are light to carry, stay fresh for days and they buy her some peace when her young children cry. It also means she doesn’t have to use water to boil eggs for breakfast or wash dishes.

Fauziya will place a packet in each of her sibling’s hands and they will munch them all the way to school. Except her younger brother Raiz who is so malnourished he can’t walk to school any more. But despite his ill health he will continuously demand to eat packaged noodles. Two of Shakeela’s boys are grossly overweight, but their vitamin profiles are morbidly poor.

It is estimated that more than 50 per cent of the children in Dharavi, another Mumbai slum, are moderately or severely malnourished. While malnutrition has always been associated with starvation, India is now developing the new trend, a malnutrition associated not with being poor, but with poor eating habits, similar to America’s growing obesity from unsuitable diets.

According to the American Diabetes Association in 2012, 29.1 million Americans are afflicted by diabetes, often caused by unsuitable diets, with another 86 million diagnosed with pre-diabetes. Now compare this to Indian statistics: diabetes has increased from 1.2 per cent in 1971 to 12.1 per cent in 2013. The International Diabetes Federation estimates that India has 65 million diabetic adults which is projected to increase to 109 million by 2035. In 2012, it was estimated to have killed about one million Indians. The problem is particularly acute in urban slums. But what’s worse is Indian children develop it ten years earlier than their Western counterparts.

And all of it is linked directly to the consumption of foods that are high in fat and sugar. It is a well-know fact that Indians favour expensive, calorific food as a way of showing hospitality. Lavishing sweets on guests and relatives is a matter of pride for us, a sign of prosperity. Crisil rates that India’s current fast food market is set to double to Rs 70 billion by 2016.  In fact it is estimated that by 2015, India, Russia and Brazil will spend a larger percentage of their GDP on food than Japan, making India a major retail grocery market worldwide.

So the biggest fast-food companies have swooped upon India to feed the emerging needs of a burgeoning middle class with products that are under increased scrutiny by the Food and Drug Administration (FDA) in America. PepsiCo, Coca Cola, Dominos, Taco Bell, Kraft are now in India with myriad strategies to woo customers: low cost, speedy delivery and modified recipes that cater specially to India’s palate—a spicy burger at McDonald’s or masala-laced chips from Lays. Pizzas and burgers account for 80 per cent of the quick food market in India. Spending in Tier 2 and 3 cities is expected to increase by 150 per cent by 2016, faster than big metros.

And in keeping with their historical, global marketing policies, children were fair game. It was only in 2010 that eleven companies in India, including PepsiCo and Kellogg’s, agreed to stop advertising to children under the age of twelve in India and avoid targeting primary schools unless their product met nutritional requirements.

But what is ‘junk’ food? Is it calorific food? If so, think again about your Naniji’s oily Theplas. Is it GMO or genetically modified food? In which case PepsiCo India’s Uncle Chips is on Greenpeace’s ‘green list’ while Nestle’s Lactogen is not. Or is it food with enhancers and additives for that Umami taste you love so much? Is it hormones in your milk or pesticide- treated wheat? The bad news is that there is no escape. The definition of junk food is expanding and it’s either one of these or a combination of all.

While it is easy to blame multinationals for India’s growing junk food addiction, a closer look at our desi diet also raises doubts. For instance, is a typical Indian breakfast healthier than a bowl of cornflakes or a breakfast burrito? Aloo Paranthas, poha, congee, medu vada, idlis—all carbohydrate and fat-rich, meant to kick-start the day, are not low-calorie meals. How many vitamins does a butter dosa have, how much fibre is there in a plate of Sheera? So can you blame golden cereal with skimmed milk for your diabetes? While homemade food may not contain as many preservatives,may have been cooked with cleaner oil and fresher produce, a Mysore bonda is still a fatty, salty snack. While 100 g of Cream and Onion Lays has approximately 544 calories, a similar-sized plate of deep-fried samosas has about 508.

The average meal served at American chains like Wendy’s or IHOP have ranged from 1200-1800 calories without dessert and sides. But how is this any different from our thalis which consist of repeated servings of rice and ghee-smeared rotis? As it turns out, not very different at all. The average Indian thali with dessert but, only one helping, ranges from 1600-2000 calories. A Haldiram’s 10 g bag of aloo bhujia is 63 calories. This means it’s more calorific than 10 g of Cheeto’s cheez puffs at 51.3 calories. A vada pao is a cheap meal for someone on a budget, at Rs 15-20 for a roughly 300-calorie potato-fritter bun. But how many Indians will blame this snack for heart disease or sue any pao bhaji vendor outside Bandra Kurla Complex. And how different is a portion of Doritos from freshly-fried kachoris or Kailash Parbat’s aloo chaat?

There are differences. Some real, some psychological, and many to do with product reach. Cheeto’s masala cheese balls are described on the PepsiCo India website as ‘Goodness of Wholegrain’ and ‘Made with Real Cheese’. When was the last time a Punjabi cheese parantha was described this way?