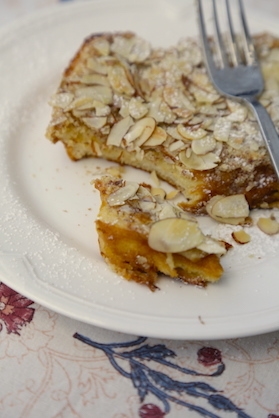 Bostock is a French toast like no other. A classic from Normandy the bread can be soaked and layered several hours before you are ready to bake it.

For the milk bath

For the cinnamon syrup:

Boil together 1 cup castor sugar, 1 tbspn brown sugar, 3 inch stick of cinnamon and 2.5 cups of water on a medium flame until you have 1 cup of syrup. Cool, strain and discard cinnamon stick. Stir in 1 tbsp rum or brandy. Keeps refrigerated for a month. Great in cocktails, over gelato and bread pudding.

Whisk the egg, milk, vanilla, sugar and cinnamon together. Pour into a 9 by 12 inch cake pan. Place the 3 slices of bread in the egg bath and allow them to absorb the liquid on both sides.

Spread the top of each slice lightly with the marmalade or jam of your choice. If you plan to bake this later cover tightly with plastic wrap and refrigerate for a few hours or overnight. Let it reach room temperature before you bake it.

Whisk together all the ingredients for the frangipane in a medium mixing bowl using a balloon whisk. You should have a wet, soft, easily spreadable mixture.

Divide this mixture into 3 portions and spread over the marmalade on the brioche slices.

Bake in the middle rung until the frangipane is bubbly but still moist about 20-25 minutes at 350F.

Remove cake pan and using a sharp flat spatula remove each slice onto a plate. Top with toasted almonds and powdered sugar.

Serve warm as is or with cinnamon syrup, fruit compote or mild honey.